HKBU showcases excellence in art-tech, space exploration and other scientific frontiers at InnoCarnival

Hong Kong Baptist University (HKBU)’s excellence in art-tech, initiatives in space exploration, and achievements at other frontiers of science is being showcased at the InnoCarnival 2022, held from 22 to 30 October at the Hong Kong Science Park.

Organised by the Innovation and Technology Commission (ITC) of the Hong Kong SAR, the InnoCarnival promotes Innovation and Technology (I&T) culture in the community, with this year’s theme being “Innovation & Technology empower our dreams”. At its pavilion at the Carnival, HKBU presents a wide range of interactive and attractive activities, demonstrations and exhibits, and shares with the public its multiple attainments in cutting-edge and innovative scientific research.

Models of the Landing Chair for spacecraft Shenzhou series for which an HKBU scholar played a key role in its design.

Artwork from the Interactive Panorama of Horses designed by HKBU artist.

The official launch of the recruitment of payload specialists in the Hong Kong SAR for the first time is recognition of the city’s ongoing contributions to the nation’s space programme. At the InnoCarnival, HKBU displays the fruits of a number of projects in support of the programme. They include the Landing Chair for spacecraft Shenzhou series for which an HKBU scholar played a key role in its design. The Landing Chair is one of the key tools used by the astronauts while landing on Earth from space flight missions, providing immediate support to their conditions of musculoskeletal system deterioration during the landing.

Another HKBU-led initiative that supports space missions is the development of a novel aptamer drug for alleviating microgravity-induced bone loss in astronauts during deep space exploration. This drug can tackle bone formation reduction induced by weightlessness and increased stiffness of carotid arteries encountered by astronauts. A cross-disciplinary team at HKBU is also working on a subcutaneous injector design for outer space applications, with a needle-free design that, together with the novel aptamer drug, can protect astronauts against bone loss in microgravity as well as reduce the amount of junk in space.

The creative arts and art-tech development are another strategic focus of HKBU. At the Carnival, the University presents its pioneering projects in these areas which offer an innovative, immersive art experience. Visitors can enjoy artwork from the Interactive Panorama of Horses, a special commission for the Hong Kong Palace Museum’s opening exhibition “Grand Gallop: Art and Culture of the Horse”; performance created by AI artists under the research project Building Platform Technologies for Symbiotic Creativity in Hong Kong; the novel concert ARIA under the Space to Breathe project that combines vocal performances, installation art and big data to explore the air we breathe and the environmental impact of pollution; and Project Labyrinth, a video-meets-video game production that reflects on a world that faces obliteration.

HKBU scholars will deliver three online seminars during the Carnival with topics spanning subjects such as how to use digital tools for English language learning, Chinese medicine treatment for long-COVID, and an online interactive map presenting the history and stories about the World War Two Battle of Hong Kong.

HKBU welcomes members of the public visiting its pavilion (D11) at InnoCarnival 2022 and joining the inspiring seminars. For more information, please visit the website http://innocarnival.hk/

HKBU showcases its art-tech, space and scientific endeavours at InnoCarnival 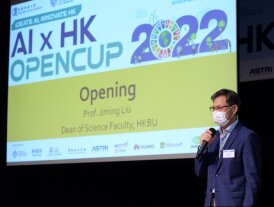