Research led by Hong Kong Baptist University (HKBU) involving the use of a pioneering female sterility technique has led to a breakthrough in the production of hybrid rice seeds. Compared to the commonly used “three-line” male sterility technique in hybrid rice seeds production, the novel approach enhances the efficiency of hybrid rice production by eliminating rice seeds that have been produced due to the self-pollination of the “restorer line”. The novel technique enables fully automatic harvesting of hybrid seeds by machines, which can substantially reduce harvesting costs.

The research results have recently been published in Cell Research, a top-ranking international scientific journal.

Self-pollinating plants are known to maintain their genome homozygosity, and as a result, their offspring can have the same features over generations.

Heterosis, which refers to the increased rate of growth due to genome heterozygosity as a result of the hybridisation of distant parents, is difficult to exploit with self-pollinating plants. In nature, rice is usually bred using self-pollination. However, over the past few decades, scientists – following pioneering work by Professor Yuan Longping, the “Father of Hybrid Rice” – have developed hybrid rice breeding techniques by exploiting sterile male genes, and these techniques can produce hybrid seeds with the normally self-pollinating rice plants in large quantities. China and other countries around the world have extensively used the male sterility technique to produce hybrid rice seeds, and it has led to a substantial increase in rice yields.

The male sterility technique first breeds cultivars, i.e. plant varieties, of the “male-sterile line” of rice as pollen receivers. Rice cultivars from the “restorer line” with normal fertility act as pollen donors, and they are grown close to the “male-sterile line” to facilitate pollen transfer for hybridisation. However, self-pollinating seeds can also be produced by the “restorer line”, and they must be removed manually to avoid mixing them up with the hybrid seeds before mechanical harvest, resulting in high harvesting costs. In theory, using sterile female rice as the “restorer line” is ideal because it cannot produce any self-pollinated seeds. However, this approach has not been adopted because the germplasm of sterile female rice remains extremely rare in nature and sterile female plants find it difficult to self-reproduce.

After nearly a decade of ongoing study, a research team led by Professor Zhang Jianhua, Chair Professor of the Department of Biology at HKBU, has managed to identify a “spontaneous thermo-sensitive female sterility 1” (TFS1) gene mutation in an elite rice cultivar during paddy field production. This genetic mutation exhibits female sterility under regular or high temperature conditions (i.e. above 25°C), and fertility is partly resumed under low temperature conditions (i.e. 23°C). It does not have any defects in terms of its vegetative growth.

Following genetic analysis using gene cloning and molecular techniques, the team found that the female sterility mutation is created by a point mutation in the genic region of Argonaute7 (AGO7), a member of the Argonaute (AGO) protein complex that is responsible for the production of many small interfering RNAs, namely tasiR-ARFs. The downstream regulation of these tasiR-ARFs regulates the pollen tube entrance into the embryo sac, but it failed under regular or high temperature conditions in the rice with TFS1 mutation, and hence double fertilisations cannot be achieved.

No need to remove “restorer lines” before harvest

To evaluate the potential of using TFS1 as a genetic tool for hybrid rice production, the team conducted field trials in Hong Kong and Hunan Province in mainland China. The TFS1 gene mutation was introduced into three cultivars of rice by introgression and genome editing to create the germplasms with thermo-sensitive female sterility. They acted as the “restorer lines” for pollen donation. Another three cultivars of rice with male sterility were used as the “male-sterile lines”.

The team planted the “restorer lines” separately next to the “male-sterile lines” as in traditional hybrid breeding, or randomly mixed them on the farm when planting. In both planting arrangements, more than 30% of the panicles of the “male-sterile lines” in Hong Kong, and 40% in Hunan Province produced hybrid seeds. The proportion of seed sets is similar to the hybrid production yields using existing “restorer lines”, but the hybrid rice seeds can be harvested without the removal of the “restorer lines”.

Chair Professor of the Department of Biology

Professor Zhang said: “Nowadays, producing hybrid rice seeds is still a labour-intensive process in agriculture. Female sterility, if it can be introduced into a ‘restorer line’ as a pure pollen donor, has great potential to reduce the cost, because the male and female parents of hybrid rice can be grown and harvested together by machines without worrying about seed purity.

“Our research findings provide a suitable trait for fully mechanised hybrid rice breeding, and our genetic tool has shown great promise for commercial applications. To maximise rice yields, we need further large-scale field trials to improve the receptibility between female and male-sterile lines.”

Apart from researchers from HKBU, the research team included scientists from the Hunan Agricultural University, the Guangdong Academy of Agricultural Sciences, the University of California at Davis, and the National Agriculture and Food Research Organisation in Japan. 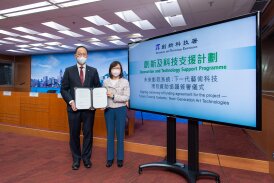 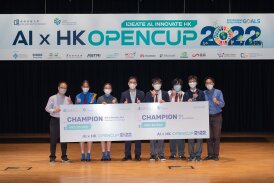