A study led by researchers from Hong Kong Baptist University (HKBU) has demonstrated that a multifunctional organic compound named F-SLOH has the potential to treat Alzheimer’s disease (AD) at an early stage. The team found that it can inhibit the aggregation of amyloid-beta (Aβ), and reduce the hyperphosphorylation of tau proteins and neuroinflammation in the brain to improve the pathological features of AD. The findings have been published in the international academic journal Redox Biology.

AD is the most common cause of dementia. It accounts for nearly 65% of dementia cases in elderly Hong Kong Chinese. It is pathologically characterised by the abnormal aggregation of Aβ, the hyperphosphorylation of tau proteins and neuroinflammation in the nerve cells in the brain, which cause progressive neuronal loss and cognitive impairment. Currently there is no cure for AD, and the available medicines can only relieve its symptoms. Inhibiting the abnormal aggregation of Aβ and the hyperphosphorylation of tau proteins is considered the primary and a promising therapeutic approach to treat AD.

In the search for novel therapeutic and diagnostic methods for AD, a research team comprising Professor Li Min, Professor of the Teaching and Research Division and Associate Dean of the School of Chinese Medicine; Professor Ricky Wong Man-shing, Professor of the Department of Chemistry of the Faculty of Science; and Dr Iyaswamy Ashok, Research Assistant Professor of the Teaching and Research Division of the School of Chinese Medicine at HKBU, demonstrated the in vivo therapeutic efficacy of a compound called F-SLOH in reducing the abnormal aggregation of Aβ, the hyperphosphorylation of tau proteins and neuroinflammation in the nerves cells in the brain, thereby improving the learning and memory functions of mice with AD.

F-SLOH is a multi-functional cyanine probe synthesised by a team led by Professor Ricky Wong Man-shing for the detection of biological materials such as proteins and peptides. Its features include real-time visualisation of Aβ aggregation in brains, excellent permeability across the blood-brain barrier and low bio-toxicity. Previous studies showed that F-SLOH could inhibit the abnormal aggregation of Aβ species and provide neuroprotection against neurotoxicity induced by the abnormal aggregation of Aβ in vitro at the cellular level.

To determine the therapeutic efficacy of F-SLOH for AD, the researchers injected or fed F-SLOH to a group of transgenic AD mice. Histopathology and biochemical analyses showed that in mice treated with F-SLOH, Aβ oligomers (one of the Aβ species) and Aβ plaque deposits (the clumps of Aβ) were dramatically reduced in their hippocampus and their brains when compared with the AD mice in the control group who had not been fed F-SLOH.

Aggregation of Aβ is closely related to the dysfunction of the links between nerve cells and memory decline. The researchers conducted two experiments to test the memory functions of AD mice. In the first experiment, mice were trained to swim in a water maze, reach a platform and remember its position. After the platform was removed, researchers observed whether the mice were able to recall and approach the original position of the platform. Compared to the control group, transgenic AD mice treated with F-SLOH spent more time swimming around the platform’s original position, showing that they can better memorise the platform’s location.

In the second experiment, mice were placed in a chamber and exposed to an audio tone followed by an instant small electric shock to their feet from the floor of the chamber. On the following day, they were put back in the chamber but without any electric shock. When the mice were exposed to the same audio tone, they “froze” their body movements due to the fear of an electric shock. The transgenic AD mice treated with F-SLOH exhibited a longer freezing time than that of the control group.

The results of the two experiments showed that AD mice treated with F-SLOH have better memories compared to the control group, suggesting that F-SLOH improved AD mice’s memory and cognitive functions.

The researchers also revealed that F-SLOH degraded the abnormal aggregation of Aβ and reduced the levels of tau protein hyperphosphorylation, the amyloid precursor protein and its metabolites through the activation of the transcription factor EB. Transcription factor EB is the main regulator of the autophagy-lysosomal pathway, a major mechanism for degrading ageing intracellular macromolecular proteins, including the intracellular metabolites such as Aβ aggregates.

Professor Li Min said: “AD patients lose their self-management abilities and require long-term care as the disease progresses. As the population is ageing in Hong Kong, the prevalence of AD is likely to increase. There is an urgent need to develop new drugs that can treat or slow down the progression of AD. The current study suggests that the compound F-SLOH has promising theragnostic potential for treating AD at an early stage.”

Professor Ricky Wong Man-shing said: “The study provides the first in vivo evidence that F-SLOH is an effective agent that can target and treat multiple neurodegenerative changes in an AD mouse model. The research findings can drive advancements in AD diagnosis and treatment in humans.” 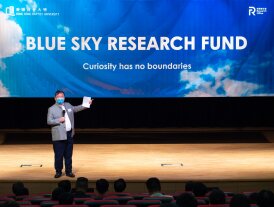 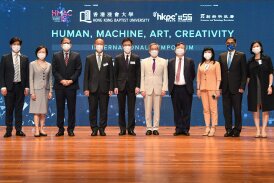