The Hong Kong Baptist University Symphony Orchestra (HKBU Symphony Orchestra) held its Annual Gala Concert this evening (14 July) in the Hong Kong City Hall. Apart from showcasing HKBU student musicians’ outstanding artistic talent, this year’s Concert featured the integration of technological elements, and it presented the first human-machine collaborative performance of its kind in the world together with an AI virtual choir, AI virtual dancers and an AI media artist.

Dubbed “A Lovers’ Reunion”, the Concert was an accredited event celebrating the 25th Anniversary of the Establishment of the Hong Kong Special Administrative Region. It attracted about 800 people, including Mr Kevin Yeung Yun-hung, Secretary for Culture, Sports and Tourism, and other officials of the HKSAR Government; members of the Legislative Council; representatives from foreign consulates in Hong Kong; movers and shakers in the arts and culture as well as science and technology; and friends of HKBU from different sectors.

Dr Clement Chen, Chairman of the Council and the Court, Professor Alexander Wai, President and Vice-Chancellor, Council and Court members, and senior management members of HKBU also experienced the innovative performance which showcased human creativity alongside artificial intelligence together with the University’s staff members and students as well as the general public.

The HKBU Symphony Orchestra and an AI virtual choir perform a newly arranged choral-orchestral version of the song Pearl of the Orient, with an accompanying cross-media visual narrative based on the lyrics and music created by an AI media artist.

The HKBU Symphony Orchestra and an AI virtual choir perform a newly arranged choral-orchestral version of the song Pearl of the Orient, with an accompanying cross-media visual narrative based on the lyrics and music created by an AI media artist.

Professor Johnny M Poon puts on sensors to conduct the performance of the Symphony Orchestra and the AI virtual choir.

At the Concert, the HKBU Symphony Orchestra shared the stage with an AI virtual choir to perform a newly arranged choral-orchestral version of the song Pearl of the Orient. Based on the data collected from human singing and speaking, the machine learnt how humans sing, enabling it to express emotions artistically in accordance with the music.

An AI media artist also learnt from the lyrics of the song. Due to the nature of its training, it can associate the underlying meaning of the lyrics with an appreciation of the beauty of Hong Kong, and it used this information to create a cross-media visual narrative which portrayed its aesthetic imagination of the song. As a result, the audience experienced an immersive cross-media performance, and it marked the first time in the world that an AI choir had combined with a machine-generated visual storyteller to perform interactively with a conductor and an orchestra.

Another highlight of the Concert was a ballet performance featuring AI virtual dancers in Ravel’s Daphnis et Chloé, accompanied live by the HKBU Symphony Orchestra. The AI’s ballet movements were inspired by a newly discovered species of box jellyfish in Hong Kong. In collaboration with professional dancers from the Hong Kong Dance Company, the machine has been trained to identify patterns in natural scenery, and it used these patterns to choreograph the ballet. The generated dance was performed by virtual dancers in a natural and artistic way based on the machine’s own understanding of the music.

The AI technologies featured in this performance were developed by a team of researchers from HKBU’s Augmented Creativity Lab, which is led by Professor Guo Yike, Vice-President (Research and Development) of HKBU. He is also the project leader of a research project entitled “Building Platform Technologies for Symbiotic Creativity in Hong Kong”, and it was awarded HK$52.84 million in research funding by the Theme-based Research Scheme (11th round) under the Research Grants Council (RGC) for a period of five years. Professor Johnny M Poon, the deputy project coordinator, is the Founding Dean of HKBU’s School of Creative Arts and also the music director and conductor of the HKBU Symphony Orchestra and the Collegium Musicum Hong Kong. The AI-powered performance is one of the most significant milestones of the supporting project.

The Concert also shone a spotlight on the artistic prowess of HKBU’s student musicians during the performances of Saint-Saëns’s Introduction and Rondo Capriccioso in A minor, Op. 28; Borne’s Fantaisie brillante sur ‘Carmen’; and Lauryn Kurniawan’s Rasa for string quartet and gamelan. 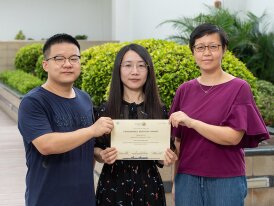 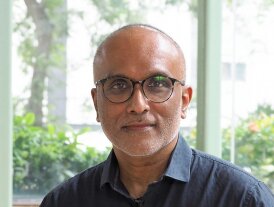