Perovskite solar cells (PSCs) have recently emerged as a disruptive photovoltaic technology, which is transforming the landscape of solar energy. Within only one decade, the power conversion efficiency of PSCs has surpassed that of polycrystalline silicon solar cells. More importantly, PSCs can be fabricated at near ambient temperatures using rapid solution coating methods. This potentially unlocks an unprecedented opportunity in the large-scale production of high-performance solar cells on light-weight and flexible substrates, making PSCs extremely suitable for applications to power-generating integrations the urban environment. For example, the deployment of flexible PSCs may transform our buildings, transportation, and indoor agriculture into an advanced setting that not only generates low-carbon power for standalone operation, but also IoT for building a smart society.

Dr. Yuanyuan (Alvin) Zhou, Assistant Professor in the Department of Physics at HKBU, has been doing advanced materials research that probes the fundamental sciences related to PSCs. Under the interdisciplinary research drive of HKBU, he is also highly interested in developing this promising semiconductor technology for real-world applications and imparting visible societal impacts. Recently, Dr Zhou led an international research collaboration to achieve flexible PSCs that are not only highly efficient and stable, but are also able to sustain mechanical bending over thousands of cycles. This work is now published in Nature Communications.

The ‘secret’ underlying this exciting achievement is a change that DrZhou and device structure. In a typical PSC structure, a perovskite semiconductor layer is sandwiched by two charge-transporting layers that respectively extract light-generated charge carriers, electrons and holes. The interfaces between perovskite and charge-transporting layers generally exhibit a planar structure. In the work, based on a prescribed interdiffusion reaction between chemically-modified perovskite and charge-transporting layers, created a new interface that presents a 3D interpenetrating structure. Their mechanistic studies reveal that this novel interface design can substantially mitigate the issues of facile delamination and fracture progression upon bending associated with those devices with conventional planar interfaces. As a result, the flexible PSC in this work can retain more than 85% of initial efficiency over 2500 bending cycles. 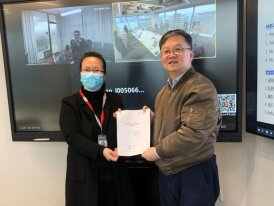